Erica Crompton is an exceptional spokesperson on mental health issues and schizophrenia. She is enticing audiences with her unique personal story of illness. Erica has a history of paranoid schizophrenia with a current diagnosis of schizoaffective and lived experience of psychosis. While dealing with her own illness, she has still managed to maintain a job as a freelance journalist. She has handled her illness with therapy and medication for almost two decades. During this period, Erica spent one week on psychiatric ward in 2009 after surviving a suicide attempt in a run-down flatshare in Birmingham, UK. As a keynote speaker, Erica inspires audiences with her unique story of living with psychosis and schizophrenia.

She has a degree in journalism and is working full-time as a freelance journalist and editor. Erica is a former Editor of Ophthalmology Times Europe. Additionally, she has held long-term and full-time staff positions at The Daily Telegraph, the Mail Online, John Lewis’ head office and as a radio script writer at UTV, all while experiencing psychosis. Working as a freelance journalist, Erica has written about her mental illness for The New York Times, The Independent, The Lancet Psychiatry, Woman Magazine, The Mail on Sunday and Chat.

Erica is the founder of Medfed, a brand for people with severe mental illnesses that promotes mental well-being. She challenges the mental health stigma using collages, bespoke prints, bright clothes and inks.

In 2020, her debut book titled ‘The Beginner’s Guide to Sanity, a self-help book for people with psychosis’ is out. The book is written together with Professor Stephen Lawrie and is being published by Hammersmith Health Books.

Erica is based in Staffordshire, UK. She enjoys walking and loves Brazilian dancing. In her spare time, she is a mental health activist, and she is running her own fashion label and ‘mad-to-order’ t-shirt design service, Medfed. 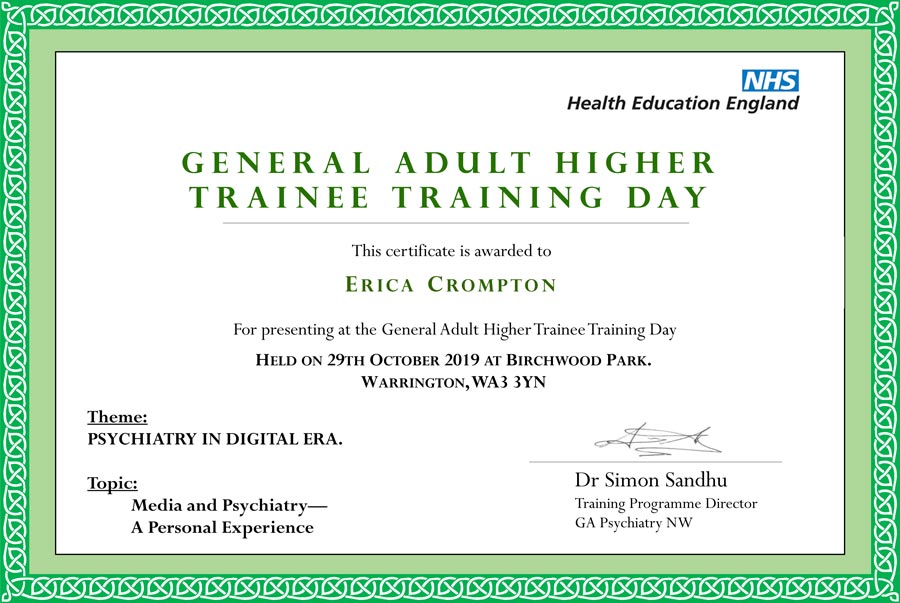